one on one coaching and mentorship with producer Gary gray

Work with Producer Gary Gray, one on one, in a 6 month long Mentorship on how to produce music for Television.

2) Monthly lessons and assignments from Gary for 6 months. If you need to skip any months - no problem. You can pick  up where you left off. AND - you can start whenever you'd like.

4) Ongoing critiques of your music and specific feedback on areas to improve. You'll be able to send Gary your mixes for critiquing via email in between your monthly lessons!
​
5) A chance to intern for and/or work with Gary and his company Gary Gray Productions. (note: there is no guarantee of this and is entirely dependent on the quality of your tracks and Gary's needs)

How To Mix Tracks For Television By Gary Gray

How To Produce Music For Licensing
​Webinar With Gary Gray

How To License Your Music Premium and Award winning producer Gary Gray, are offering a very special package featuring every course Gary has developed to date for HTLYM, along with 6 months of customized, private one-on-one Skype mentoring sessions [with secure screen sharing on your DAW, allowing Gary to "look over your shoulder," in your studio, while he mentors you through specific mixing and mastering techniques], delivered once a month, along with unlimited email access for critiques, questions and success stories, along the way. These private mentoring sessions will be customized to your needs, so that you get exactly what you need.

In addition to 6 months of coaching and assignments from Gary, you'll receive the following courses, created and compiled over a period of months with painstaking detail. Each is delivered in an easy-to-understand, up-beat style, with students from all over the world reporting life-changing wins. These courses apply to all genres of music.

You'll Get All four of Gary's courses created for How To License Your Music Premium:
​
Music Production FundaMENTALs alone features 8 one hour-long videos packed with everything a home studio producer/engineer needs to know in order to create masterpiece recordings, along with stem files delivered directly to your email inbox for use in the course mixing and mastering exercises.  You'll get over 20 hours of in depth training on how to produce, mix and master music for licensing.
​
What To Expect From Taking The Program
​
1) Learn how to produce tracks that are "on target" for television and licensing.

2) Get detailed, targeted feedback on your tracks and production from Gary, at any time throughout the program.

3) During your one-on-one mentoring, you will experience revolutionary new MUSIC PRODUCTION EAR-TRAINING EXERCISES developed by Gary that will help you achieve the number one most important upgrade to the most important tool you use on a daily basis: YOUR EAR! As Gary says, use your ear, not your gear, as a priority when you mix and master. How can you achieve industry standard music production when you can't hear what you can't hear!!?? This is the secret to Gary's success as a mentor and why he is one of the most sought after Mentors in the industry.

4)Added benefits of life-coaching (if needed) where Gary will help you maximize your time management and help you balance your life-style to prepare you for the foundation necessary to step up to the work-ethic needed to survive and succeed in the music industry.

​5)The power booster for your career of directly and personally networking with one of the top music producers and mentors in the music industry.

13 Major Recording, Mixing and Mastering projects completed in the last 6 years (including 2019) for The Disney Music Group and 20th Century Fox -right out of Gary's own home studio.

Gary has received two awards as a singer/songwriter and producer from The U.K. Songwriting Contest.
Multiple tracks produced for Aaron Davison and placed on the CBS Hit Soap Opera "The Young & The Restless."

Gary worked on a Telly Award-Winning project as arranger, producer, mixing and mastering engineer, as well as work on video post-production.

Gary Gray is a California based producer with over 30 years of experience working in the industry.

Gary produced a track that was chosen by Industry Veteran Music Supervisor Mason Cooper as a single on Concord Records Film Score Sound Track Album for the Dennis Quaid Film “Beneath The Darkness.”
Gary has had two recordings premiered in the last year on CBS National Radio, one a tribute to 911 written by Gary premiered on the 10th Anniversary of 911 as the theme song, “Freedom Lives On In America,” and “Hocus Pocus,” premiered this past month.

Gary also was chosen to orchestrate and co-produce the 2010 solo album “Blue Highway” for Multi-Platinum Recording Artist and Rock and Roll Hall of Famer Marty Balin (founder of Jefferson Starship/Jefferson Airplane).  After orchestrating and co-producing the album, Marty sent a note, along with Gary's check stating, "Gary Gray is a master. His orchestrations fit my songs like a second pair of pants and made them 10 times better." 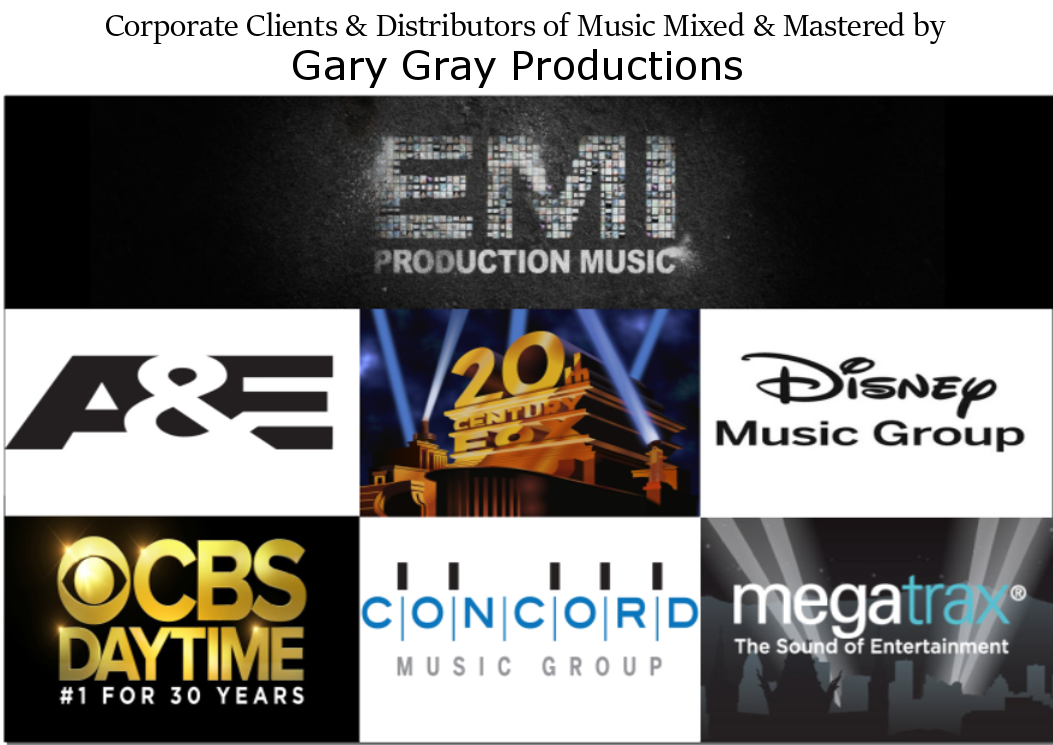